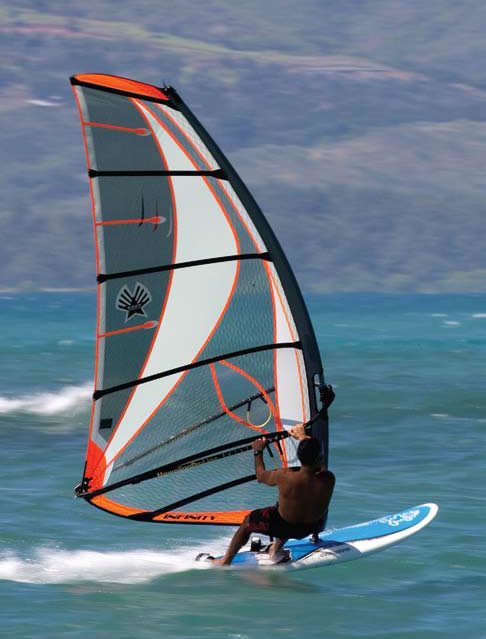 In 1983 David Ezzy made his first windsurfing sail under the Ezzy Sail black and white eagle logo.  He started his custom sail business on Maui in an old shed that has since become a sleek design loft.

Back then, custom sails were the means to success for every serious sailor and Ezzy Sails led the sailing revolution. Ezzy made sails that were renowned for their “Hookipa” traits: strength and power.

The early nineties saw the sale of the German-based North Sails Windsurfing and new management took over the head office in Germany and at the factory in Sri Lanka. Ezzy tried to maintain his close involvement in the operation of the factory, but cost-cutting decisions began to take precedence over sail quality and even took precedence over the human rights of the Sri Lankan factory workers. The conflict over the treatment of workers vs. corporate profits reached a head in the summer of ’92, when upon arriving at the factory to put his designs into production, Ezzy found the air in the factory to be filled with the fumes of toxic spray glue. His attempts to help the workers by notifying management and North Sails’ owners, sending for product specifications from the glue manufacturer, brainstorming ideas for a construction of air vents to carry out the fumes, were all met with a curt, “mind your own business”: the 50 gallon drums of spray glue would stay and David Ezzy resigned in protest.

David visited other sail lofts in Sri Lanka and China with the idea of manufacturing Ezzy sails, but his early experience of having control over the quality at North Sails Windsurfing, made him realize that he would have to own his own factory to produce the high quality sails he wanted.

Meanwhile, his former colleagues at North Sails, the Sri Lankan nationals, organized themselves and approached David to start a factory of his own with them. In those bold days, the friends started a new venture with a shared ownership in Ezzy Sails Lanka. These top North Sails Winsurfing Sri Lankan managers and supervisors all became proud Ezzy Sails’ employees and part owners. The venture began in a small, old building in a town outside of the industrial zone.

Since high quality is David Ezzy’s most important consideration, employee quality-of-life is essential. The Ezzy factory today is housed in a 20,000 square foot, brand-new building with a large grass field out back for company cricket games. It is a safe, non-toxic work environment with state-of-the-art computer cutting machines, employee amenities such as a staffed kitchen, transportation, uniforms and a music sound system.

The distribution reach of Ezzy Sails has expanded to cover most countries worldwide. Word of mouth spreads the knowledge of the high quality standards behind the name Ezzy and the company continues to grow.